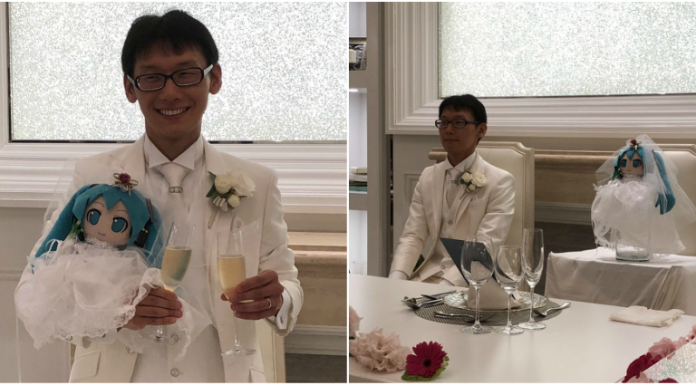 A 35-year-old Japanese man named Akihido Kondo married virtual pop star Hatsune Miku on 4 Nov after a decade of unhappiness with women in the real world.

Ten years ago, at the age of 25, Kondo had the sour experience of being bullied by his female superiors at his workplace. The experience eventually impacted his ability to get along with women and Kondo ultimately began to distrust real women.

This was when Hatsune Miku entered his life. Hatsune Miku is a voice synthesizer software developed by Crypton Future Media. Being the first Japanese Vocaloid to use the Japanese version of the Vocaloid 2 engine, Hatsune Miku – characterised as a 16-year-old singing sensation – quickly gained a cult following in Japan.

According to Kondo, Hatsune Miku helped him get through a rough decade in his life and he married the character, in a symbol of his commitment and devotion to the virtual girl.

In a ceremony attended by 39 guests, including a parliamentarian, Kondo and a plush toy representing his bride – dressed in all white – “exchanged” rings and vows and even signed a marriage certificate.

Kondo shared on Twitter: “Today, I held a wedding ceremony with Miku. We invited 39 people and held the ceremony seriously. Many blessings through words, messages of support and cooperation were realized. We would like to express our deepest gratitude to those who supported us.”

The unusual wedding quickly went viral on social media in Japan and messages of congratulations poured in:

“Congratulations on your wedding! You’ve inspired me to believe in love.”

“I think that there has been a lot of prejudice here, but some of you understand that his love to Miku is genuine. There may be a lot of difficulties in the future, but do not let go of your hand at all times and be happy. Congratulations.”

“Congratulations on your marriage with Miku! I saw photos from the wedding hall and reception from other tweets. It seems very happy. It was blessed and it was a wonderful wedding ceremony. Although the media mentioned various things, do not mind them at all. I hope you and Miku will be happy for a long time.”

“Congratulations on your wedding. You deserve happiness.”

“I hope you stay happy forever with Miku.”

Check out the pictures from Kondo’s wedding to Hatsune Miku here: