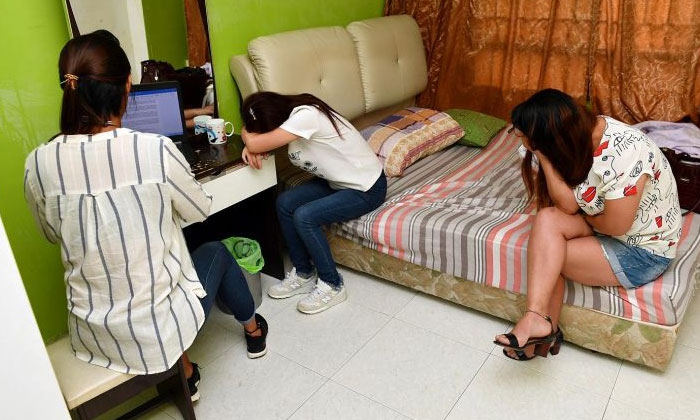 Three women between the ages of 34 and 48 were arrested in a flat at Block 664C Jurong West Street 64 on Oct 31 at 3.03pm. The women, believed to be from China, appeared to be using the flat as a makeshift brothel.

Before the raid, three men were reportedly observed entering the flat in the span of one hour. One of the men left the flat after 15 minutes.

When the police raided the four-room apartment, they found two mattresses and a clothes rack with more than 30 towels hanging out to dry. The police also seized condoms and lubricants found in the flat.

“Police confirm that an operation was conducted on Oct 31, 2017, at 3.03pm at Block 664C, Jurong West Street 64. Three women were arrested for an offence under the Women’s Charter. Police investigations are ongoing.”

The police has said that they “will spare no effort in clamping down on online vice activities.”

Just last Friday (27 Oct), the police reported that 17 women, between the ages of 26 and 38, were arrested in a raid of eight homes in Hougang and Sembawang. The women had reportedly advertised sexual services online and provided such services in the homes.

A man was arrested alongside the women, after he was observed collecting rent from two of the women at one of the homes. The police also seized $8,400 cash and mobile phones as evidence during the raid.

The police indicated that they would also be investigating the homeowners of the apartments the sexual services were provided in, since most of the services were carried out in the HDB flats.

Earlier in September, the police reported that they had arrested 12 women and a man, between the ages of 23 and 46, in August under the Women’s Charter for their alleged involvement in sexual services offered in Yishun, Kovan and Sembawang.

Like the most recent cases, the women arrested in August were also suspected to have been advertising sexual services online and providing such services in five residential units.

The sole man who was arrested is believed to have assisted in managing brothel activities. Investigations will be carried out against the landlords of those arrested in this raid, as well.

Police officers seized $1,560 in cash, mobile phones and other related documents during the August raid.

In addition, any person who commits the offence of knowingly living wholly or in part on the earnings of the prostitution of another person, is liable to a fine of up to $10,000, or up to five years’ imprisonment, or both.