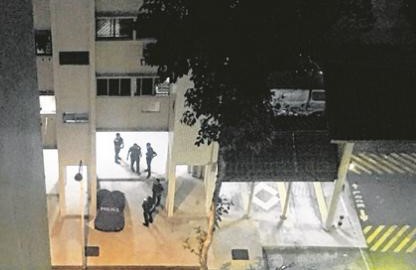 This story has been edited after receiving a personal request from the victim’s friend. We have removed the picture and the name of the victim. The comments thread is closed.
Chinese newspaper Shin Min reported that a 17-year-old poly student jumped to her death from the 12th storey of her flat in Block 394 Yishun Ave 6. The incident happened yesterday (4 Apr) at about 8pm.
Witnesses were alerted to the incident when they heard a loud ‘thud’ from the fall. The mother of the student was seen at the foot of the block with her young son soon after. The mother was so distraught that she collapsed while crying beside her daughter, witnesses said.
According to the newspaper, the student’s name is Ong Si Ying. She studied at a local polytechnic and may have been troubled by her boyfriend’s attempt to end their 2 year relationship.
The family said that they found a message from the student’s boyfriend in her mobile phone telling her that he needed to be alone.
Neighbours told the newspaper that Ms Ong’s family was a close knit one. The neighbours further said that they have seen the student’s boyfriend near where she lived, but that he was not seen as frequently recently.Follow us on Social Media