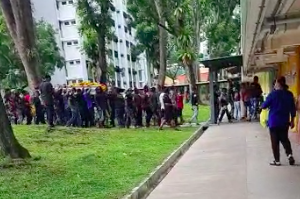 Singapore — Police investigations have ensued after a funeral in Boon Lay was attended by almost 200 people, with many seen not wearing masks.

The funeral, which took place on Sunday (June 13), attracted the attention of many passers-by who took videos and photos of the big funeral procession.

In the videos, a large procession can be seen following the coffin, with more than 10 people carrying the coffin.

The videos also show the crowd gathered before the hearse left.

According to Chinese daily Wanbao, the crowd had started gathering as early as 1 pm at the Block 191 playground and the proceedings lasted till about 7 pm.

According to online reports, the group had allegedly circled Block 191 Boon Lay Drive for an hour, chanting loudly.

On Tuesday (June 15), the police said that a 42-year-old man was arrested for alleged disorderly behaviour at the funeral.

The police also added that the 14 suspects who were initially arrested are aged between 17 and 40.

Anyone convicted of being a member or acting as a member of an unlawful society can be fined up to S$5,000, jailed for up to three years, or both.

The police are also looking into possible breaches of Covid-19 safe distancing measures during the funeral procession.

Those found guilty of flouting a Covid-19 control order can be fined up to S$10,000 on first conviction, jailed up to six months, or both.

The deceased was a 43-year-old father of four daughters and a son. /TISGFollow us on Social Media