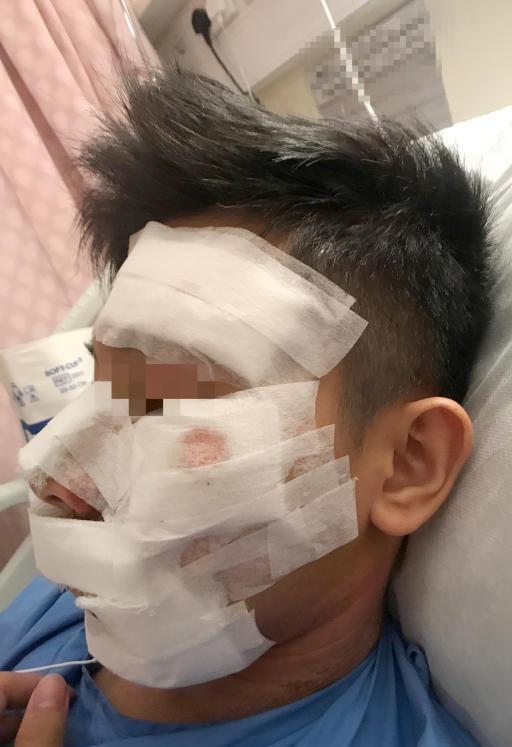 A 14-year-old cyclist could be left permanently disfigured after an Uber vehicle crashed into him along the junction of East Coast Park and Still Road around 5pm yesterday.

The boy had been cycling to meet his friend in Eunos to eat Hokkien Mee. Heavily bandaged, he told the Chinese daily:

“I was cycling on the road. Suddenly something hit me and I smashed into the bonnet of a car. Then I blacked out and only woke up when the ambulance arrived.”

The teenager who needs the aid of a wheelchair to move around, is said to be deeply traumatised by the accident. He was conveyed to Changi General Hospital, following the accident.

His mother, Mrs Lui – a 46-year-old graphic designer – said that her son was silent throughout the night last night before becoming angry about the accident today. She added that she was concerned about the injuries her son has suffered, as well:

“The doctor said that the wounds on the left side of his face and forehead are deep and could leave permanent scars.”

The teenager’s father, 50-year-old businessman Mr Lui, said that he received the bad news that day while driving:

“We were in the car when they gave us the bad news. My wife broke down and cried. We rushed to the scene but my son had already been sent to the hospital and we only saw the driver.”

Mr Lui also reported seeing the driver carrying a walking stick at the hospital. He indicated that he was puzzled by this, since the driver didn’t appear to have suffered any injuries.

No one else has been reported to have been injured. The Uber vehicle was not ferrying any passengers at the time of the incident.