12-year-old Singaporean is a ‘memory wizard’ at world championship 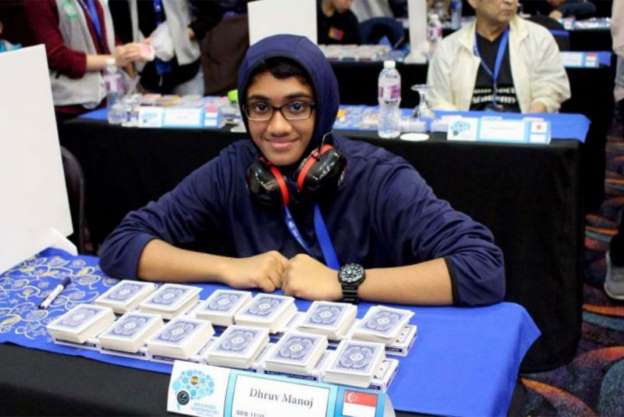 HERE’S a very smart Singapore lad. He’s only 12 and Dhruv Manoj (above) from Sembawang Primary School made heads turn by winning two golds at the recent World Memory Championships in Hongkong.

His razor-sharp memory got him top marks in the ‘names and faces’ and ‘random words’ disciplines, beating out 56 other contestants in the kids’ category.

Rather stupendously, he memorised 87 names and faces in 15 minutes, more than seven decks of shuffled cards in an hour and, 1,155 binary numbers in half an hour. He was the only teenager to represent Singapore in the competition where over 260 contestants from China, Russia, India, Taiwan and Malaysia participated.

“The toughest part was concentrating on what I have to do because, for most of my friends, PSLE just ended. For me, sitting down there and practising…it was hard, but I managed to pull through,” says Dhruv, who had an arduous training for the competition this year as he had to appear for his Primary School Leaving Examination (PSLE).

The secret to his success was family support and his personal diligence to prepare intensively for the global competition. He would squeeze in two to three hours of practice a week before the exams and only began intensive training in October. He would practise memorising binary numbers and cards, among other drills, for about four to six hours a day.

He has now mastered the Roman memory technique of creating memory palaces, which works by associating the ideas or objects to be memorised with scenes imagined at familiar locations, such as one’s house.

To remember a deck of cards, for instance, Dhruv creates a memory palace in his school. He imagines a seven of spades as a goose playing on the piano, the three of diamonds as fishes flying in the air near the school pond, and the king of hearts as the American comedian Kevin Hart laughing hysterically while coming out from the general office.

He is supported by his 45-year-old father Dr Manoj Prabhakar, who works as a management consultant in the oil and gas industry. He forks out about $4,000 a year on his son’s travel expenses and participation fees, which usually ranges between $100 and $200.

“I found that Dhruv enjoyed doing it and he’s doing pretty well, so I thought I should support him,” says Dr Manoj, who hopes that Dhruv will rise to greater memory-heights as he excels in his academic education, too.

For the record, Dhruv broke the children’s category world record in ‘Names and Faces’ section of the World Memory Championship which was held in Jakarta, Indonesia, last year. He was able to match 96 names to faces correctly, of the 240 given. The competitors were given only 15 minutes to memorise names and faces and 30 minutes to recall and pen their answers.

The Prabhakar family has yet to decide if Dhruv will compete in this year’s world championships in Wuhan, China, as he will be enrolling in a new school, Raffles Institution, where academic expectations are at a higher end.

Asked if it has helped in his daily life, he said he has seen his grades improve significantly. He can better remember scientific facts, narratives in composition writing as well as Chinese characters for his Mandarin lessons.

On memory sports, he says: “I really love it, honestly. I love the atmosphere of competition. It’s quiet, so tense…it’s something like adrenaline, it doesn’t get you hyper but it sets your mind into such a mood.”

Physical-activity sports in his longer-term mind and Dhruv now hopes to join track and field at Raffles Institution, noted also for its sporting prowess, and continue training in memory sport on the sidelines.

Memory sports has gained mainstream attention in recent years, in part due to television shows featuring memory athletes such as Chinese reality programme The Brain, in which contestants memorise vast amounts of information. Furniture retailer Ikea has also featured Ms Wintersoul in its marketing campaign to promote its 2018 catalogue.

He said: “Breaking a world record will definitely help with promoting memory sports in Singapore…if this 12-year-old kid could do it, we should all give it a try.”Follow us on Social Media