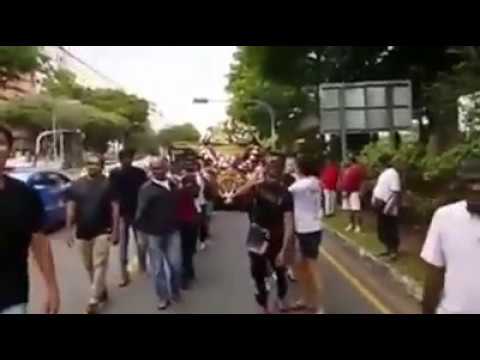 Another video clip of a different gang shouting their gang slogan at a funeral has emerged. It is unclear where or when the incident happened, but gangsters can be heard shouting “Hai Lok San! Hai Lok San!” in the clip.

Forumers at EDMW claim that the area around Amara Hotel and Tanjong Pagar Plaza is controlled by the Hai Lok San, or 108 gang.

The leader of the gang used to be Woon Eng Chong, who is also known as Amara Ah Chang. Amara Ah Chang was found dead in a mysterious manner in a Johor Bahru hospital in 2011. About 500 people attended the notorious gangster’s funeral and the police arrested 9 people during his funeral procession.

This is the second time in less than a week that videos of gangsters shouting their gang slogan in broad daylight has surfaced. On 3 March, a clip of members of the 369 gang shouting their slogan at a funeral in Bukit Merah also went viral.

Police later said that they arrested 7 men who were seen shouting gang slogans in the viral video.Follow us on Social Media