The remains of 3rd Warrant Officer (3WO) Muhammad Sadikin Bin Hasban, 33, who died in an accident in Brunei on Tuesday, October 9, was brought home to Singapore the following day. He was given a military funeral at Lim Chu Kang Muslim Cemetery, where the 9th Singapore Division/Infantry and the Army gathered to pay their respects.

3WO Sadikin had been overseeing contractors performing maintenance work at a helicopter evacuation site in Brunei, when a tree branch fell and hit him. Despite efforts to resuscitate him onsite and at the Raja Isteri Pengiran Anak Saleha (RIPAS) Hospital, he did not regain consciousness and passed away at 11:50am on October 9.

Members of 3WO Sadikin’s family were flown to Brunei by Ministry of Defence (MINDEF) after the fatality, and the ministry has been assisting the family at this difficult time. MINDEF has also launched an investigation into the incident.

This evening, servicemen from the 9th Singapore Division/Infantry and the Army gathered at Lim Chu Kang Muslim Cemetery to send off their fellow soldier and brother-in-arms, the late 3WO Muhammad Sadikin Bin Hasban.

The late 3WO Sadikin was a dedicated and committed leader who always gave his best in everything he did. He was well-respected not just by his subordinates, peers and superiors but also all the trainees he took charge of. The positive attitude he exuded never failed to resonate with the people he engaged with. He had shown the utmost professionalism in the way he conducted himself as a soldier, trainer and more importantly as a commander, who put everyone’s interest before himself.

The Singapore Army salutes the late 3WO Sadikin.”

Netizens responded on the post, honoring 3WO Sadikin for his service. 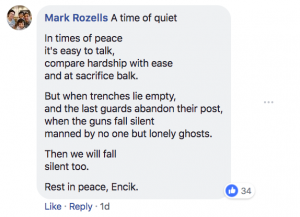 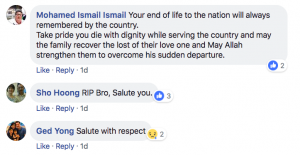