The Independent News
Featured News NEA demands that HDB homeowner must identify guests who smoked in the...

A HDB homeowner recently received a letter from the National Environment Agency (NEA), asking him to give them the names and addresses of his guests who smoked in the corridor outside his unit.

Facebook user Mohamed Rasid Bin Abdullah shared a photo of the NEA letter on social media, this morning. The letter, dated 6 June, states that the NEA’s video surveillance camera caught people smoking outside a unit in Bedok from 11 to 14 April 2019 in the evenings.

The letter is addressed to a Mr Daud. Mr Mohamed could be sharing the letter on behalf of a friend and The Independent has reached out to him to confirm whether he or someone he knows is a recipient of the letter. 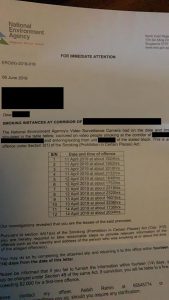 Mr Mohamed indicated that the offences could have occurred when Mr Daud hosted friends at a Hari Raya open house. He wrote: “Be careful when there’s a guest coming to celebrate raya and smoke cigarettes in our corridor. If there is a camera later the owner of the house gets a letter of summons…”

While Mr Mohamed only reported the matter on Facebook around 10am this morning, his post is already trending with over 1,300 shares. While some said that NEA was correct in acting in the manner it did, others felt that this shows there is limited freedom in Singapore:

One eagle-eyed netizen also pointed out that NEA referred to Mr Daud as a “lessee of the said premises” in the letter and not a homeowner of the HDB flat:

Last year, a real estate expert’s advice sparked uproar over whether HDB flat buyers are homeowners, lessees, or tenants/renters given the fact that HDB flats are bought on a 99-year-lease from the government.

International Property Advisor chief executive Ku Swee Yong had advised “that we be honest with ourselves and recognise that we are merely lessees who rent the HDB flats for their terms.”

Responding to the public uncertainties that ensued, Prime Minister Lee Hsien Loong called the argument that the 99-year HDB lease is “merely an extended rental” as “frankly amazing” and asserted that “HDB lessees are owners of their flats and not renters.”

Later, National Development Minister Lawrence Wong backed his party head’s views and asserted that the notion that HDB flat buyers are merely renters is “factually and legally wrong.” He further cautioned that while the government welcomes feedback on public housing, “the debate must always be based on facts, not misinformation and half-truths.”

More recently, in March this year, presumptive future prime minister Heng Swee Keat lashed out at criticism that HDB dwellers are simply tenants instead of homeowners and asked people to “get real,” at the annual PropNex conference.