After news of the online leak of the confidential information of 14,200 HIV-positive people, lawyer and politician Lim Tean had harsh words for Health Minister Gan Kim Yong on a Facebook post on Monday night, January 28, 2019.

Gan had issued an apology for the leak, saying, “I am sorry that one of our former staff who was authorized to have access to confidential information in our HIV registry appears to not have complied with our security guidelines,” which was published in Channel NewsAsia (CNA) earlier that night.

Lim Tean posted a link to the CNA article but did not mince his words. He called Gan “undoubtedly is the most incompetent Health Minister in Singapore’s history” and listed a series of mess-ups related to the Ministry, including

—the Hepatitis C ‘fiasco’ (as Lim termed it)

—the recent SingHealth data breach where the information of 1.5 million Singaporeans was compromised

—the controversy concerning the Shield programs

According to Lim, Gan “appears to have learnt nothing.” Ouch.

He then called for Prime Minister Lee Hsien Loong to fire the Health Minister. 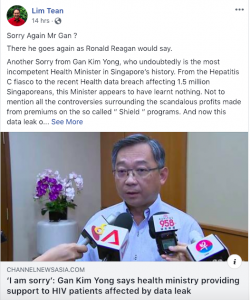 There he goes again as Ronald Reagan would say.

Another Sorry from Gan Kim Yong, who undoubtedly is the most incompetent Health Minister in Singapore’s history. From the Hepatitis C fiasco to the recent Health data breach affecting 1.5 million Singaporeans, this Minister appears to have learnt nothing. Not to mention all the controversies surrounding the scandalous profits made from premiums on the so called “ Shield “ programs. And now this data leak on HIV patients. So is he going to call another COI and is that the panacea for all incompetence in the Ministry of Health under his leadership?”

Netizens echoed Lim’s outrage with equally incensed comments to his post, which has been shared almost 250 times. 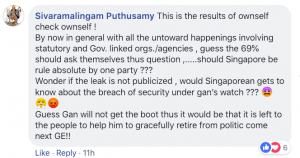