Dengue cases increase in more than two years; 207 cases reported as of Jan 5

Reports on dengue cases have increased over the past three weeks, with 207 cases reported as of January 5 of 2019, noted by National Environment Agency (NEA) to be the highest weekly number since September 2016. 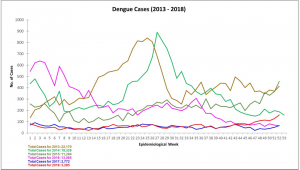 Gravitraps are traps that catch Aedes aegypti mosquitoes set up by NEA in order to collect data.

Aedes aegypti mosquitoes are the primary species responsible for transmitting viruses such as Zika, dengue, and chikungunya. The mosquito can be recognized by white markings on its legs and a marking in the form of a lyre on the upper surface of its thorax. 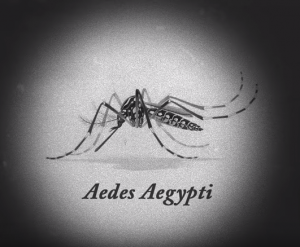 The viruses are passed on to humans through the bites of an infective female Aedes mosquito.

In the last two weeks, there were 24 cases reported in Bedok Reservoir Road, the largest dengue cluster to date.

In 2018, NEA conducted one million inspections, including about 9,000 checks at construction sites, and uncovered roughly 18,000 mosquito breeding habitats.

There were 4,100 households fined for mosquito breeding in Nov last year, while there were forty stop work orders issued to construction sites.

NEA, in a statement, “urges all members of the public and stakeholders to stay vigilant, and work together as a community to stem dengue transmission.”

A Chinese New Year advisory was also issued by NEA, reminding to properly dispose of any refuse, including large furniture or household items to prevent the discarded materials from becoming mosquito-breeding habitats.

For those planning to go abroad for vacation during the upcoming holiday period, they should also mosquito-proof their homes before they travel, such as covering all toilet bowls in the home, sealing the overflow pipe of the flushing cistern and adding a sand granular insecticide to areas where stagnant water cannot be easily removed.

NEA, together with members of the Inter-Agency Dengue Task Force and town councils, assured the public that they would continue its efforts to remove potential mosquito breeding habitats from public areas and housing estates.

“Effective dengue prevention requires the vigilance and participation of everyone in the community,” the agency stressed that noting that dengue prevention efforts will also contribute towards preventing the transmission of Zika and Chikungunya viruses.

According to World Health Organization, dengue is widespread throughout the tropics, with risk factors influenced by local spatial variations of rainfall, temperature, relative humidity, the degree of urbanization and quality of vector control services in urban areas.

Individuals should suspect dengue when a sudden onset of high fever for two to seven days is accompanied by two of the following symptoms: a severe headache, pain behind the eyes, nausea, vomiting, swollen glands, muscle and joint pains, and rashes.

NEA reminders: persons infected with dengue should protect themselves from mosquito bites by applying repellent regularly, and those showing symptoms suggestive of dengue should see doctors early to be diagnosed.

Latest updates on the dengue situation can be found on NEA’s website, the Stop Dengue Now Facebook page, or the myENV app.

The dengue outbreak has spurred attention of netizens online as some have posted locations that need to be looked into by NEA.

Another comment from one netizen explained to what is happening to the environment, which has a direct impact on the increasing population of mosquitoes.

One online user suggested in making NEA’s campaign against dengue more effective, while Masagos Zulkifli, Singapore’s Minister for the Environment and Water Resources did not fail to educate the public too. 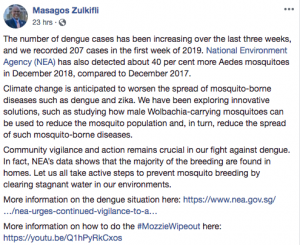 But two netizens exchange of comments on mozzie bites and booze seem to be a funny one.